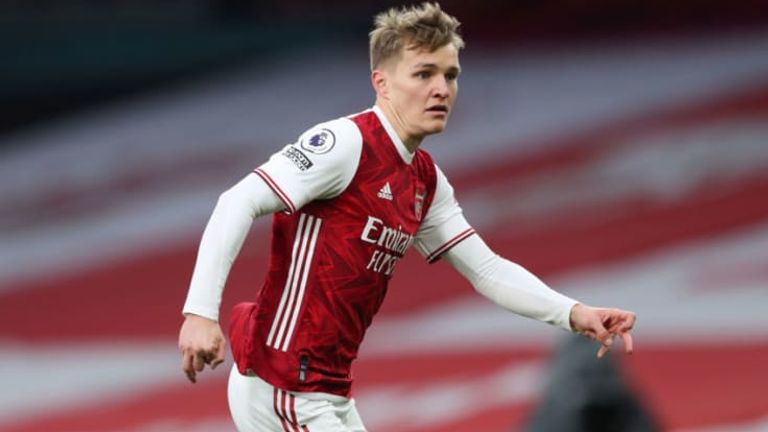 Arsenal have reportedly stepped up their interest to sign Real Madrid misfit Martin Odegaard on a permanent basis to bolster their midfield options.

According to Diario AS journalist Sergio Santos, Arsenal and Real Madrid are in advanced talks over Odegaard’s permanent return to north London.

The Norwegian starlet spent the second half of last season on loan at the Emirates after failing to land regular first-team football under Zinedine Zidane.

Despite Carlo Ancelotti’s return to the helm, the 22-year-old’s chances of breaking into Real Madrid’s starting line-up look rather slim as he prepares for another departure.

This time around, though, the Norway international could leave the Santiago Bernabeu for good.

Odegaard’s dazzling performances in the Premier League convinced Mikel Arteta to make a decisive push to take him away from the Spanish capital.

He racked up 20 appearances in all competitions under the Spaniard’s stewardship, adding two goals and one assist to his name.

Arteta is on the lookout for an illustrious playmaker to spark Arsenal’s chances of bringing European football back to the Emirates following an underwhelming season.

Indeed, a disappointing eighth-place finish saw the Gunners miss out on European competitions for the first time in 26 years.

After splashing out a small fortune to capture Ben White from Brighton to reinforce his leaky backline, Arteta is now poised to find a long-term replacement for Mesut Ozil.

A touch of class and superbly crafted attacking movements were in short supply since the Turk tumbled down the pecking order before waving goodbye to London last winter.

Leicester City dynamo James Maddison was Arsenal’s preferred choice for the playmaker role, but the King Power outfit’s unpreparedness to budge on their £60m demands blew the Londoners out of the water.

Yet, Odegaard won’t come cheap by any stretch of the imagination, as Real Madrid continue to insist on a sizeable £40m price tag.

Unlike Maddison at Leicester, the Norwegian’s first-team prospects in Madrid are far-fetched, which could boost Arsenal’s hopes of getting the deal over the line.