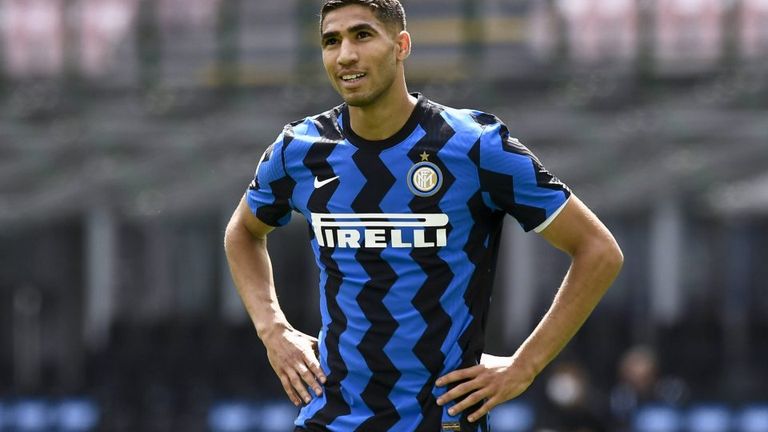 Paris Saint-Germain are reportedly on the brink of winning the race for the sought-after Inter Milan wing-back Achraf Hakimi.

PSG, Arsenal, and Chelsea have been embroiled in a three-horse race for the 22-year-old right-back over the past couple of months.

Inter are forced to sell some of their first-team stars to balance the books as they need to raise around €80million from player sales in the coming months.

Despite ending Juventus’ nine-year tenure in Serie A in 2020/21, the Nerazzurri are staring at financial turmoil and have to give up some of their headline performers.

Since the club already decided to put in maximum efforts to keep hold of Romelu Lukaku and Lautaro Martinez, Hakimi could fall victim to Inter’s desperate need for cash.

The Morocco international joined the Italians from Real Madrid last summer for a fee of €30million and has since excelled in Serie A.

Hakimi’s bursting runs down the right flank saw him muster up seven goals and eight assists in 2020/21, finishing the season as the most prolific defender in Europe’s top-five leagues.

PSG boss Mauricio Pochettino has identified the African star as his top priority following the signing of Gianluigi Donnarumma, who refused to commit his future to AC Milan.

Hakimi could now follow in the footsteps of his former rival as the Ligue 1 powerhouse prepare to launch a substantial €70m bid to get the deal over the line.

Talks between the clubs are well underway, with the player already agreeing on a five-year contract with the Ligue 1 side.

According to renowned Italian journalist Fabrizio Romano, Hakimi is on the cusp of completing a blockbuster move to France.

Such claims come as a massive blow to Chelsea and Arsenal, who were both hopeful of luring the lightning-fast wing-back to the Premier League this summer.